Skip to content
A Damselfish in Distress has a Happy Ending

“When Susan observed this injured damselfish six years ago, she probably felt helpless, disheartened, and frustrated in thinking there was not much she could do. Watching the fish swimming tenderly, Susan had little choice but to view the fish as simply fulfilling its part of the cycle of life. Similarly, this pandemic can be looked at as part of the natural process of things that happen. During this time, I, like many of you, have moments of feeling helpless and frustrated while waiting for a return to normal life. However, Susan’s article truly gives me hope for brighter days ahead. Like the damselfish, we will survive this difficult period and emerge better and stronger than ever!” – Lee Higa-Okamoto, Executive Director of the Friends of the Waikīkī Aquarium

A Damselfish in Distress has a Happy Ending

Article and pictures from susanscott.net

Last week, while sorting my photos, I found a picture I took in June, 2014 of a domino damselfish with a nasty bite across its back. I remembered, and felt sorry for, the struggling little fish, sure it would not survive.

Yesterday, in the same area, I saw a domino damselfish fanning his eggs. This is normal behavior for damselfish dads. When he’s ready for fatherhood, a male damselfish clears a nesting site on a rock, or in rubble, and turns white. To attract females, the pale male makes chirping sounds while he dips and dives—on his side.

If a female fancies this song and dance, the male leads her to the homestead where she lays tiny, clear eggs. The male follows closely behind fertilizing the eggs. Lucky males attract additional females to lay eggs in the same nest on the same day.

The female leaves babysitting to the male who aerates the brood with sideways flutters of his body. Eggs hatch in 4 days. 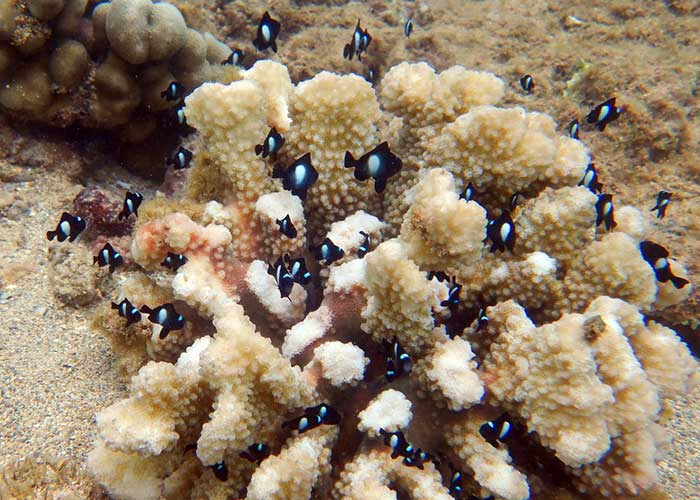 Hatchlings have a “headlight” spot on their foreheads, and often shelter among branching coral heads. ©Susan Scott

The water warming in summer stimulates spawning in damselfish and other reef species, one reason snorkelers may be noticing more fish right now. Damselfish breed all summer. June is their peak month.

When I leaned in for a closer look at the fanned eggs (so small I could not see them), the rascal, in typical male damselfish bravado, charged me. We circled one another for a few seconds, while the 5-inch-long fish darted about, working hard to drive me from his precious offspring.

It worked. I shot a few pictures and left the father in peace. It wasn’t until I downloaded my photos that I saw the scar on the feisty fish’s back. 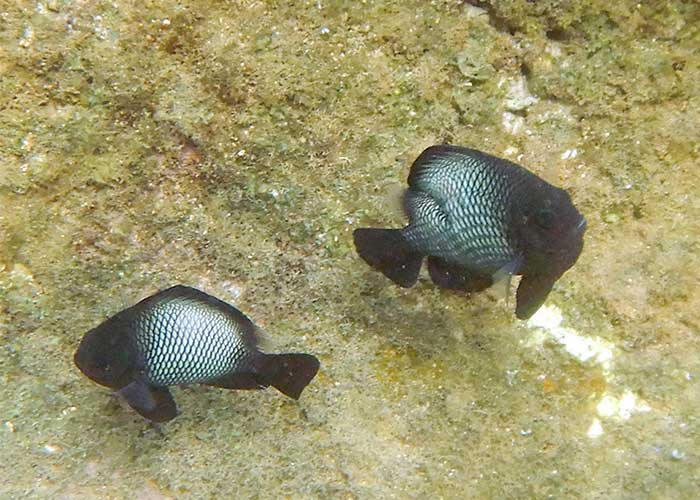 The scar is clearly visible on the charging fish’s (right) back. ©Susan Scott

The lifespan of domino damselfish is up to 10 years in the wild, 20 in captivity. In comparing the two photos, I believe it’s the same fish.

This isn’t a stretch. In his reef fish guidebook, fellow author John Hoover writes that a Hawaiian domino damselfish, bearing a bite scar, at Molokini Islet (off Maui) secured the same nesting site for 9 years.

I felt good all day about this surprise story of survival. Thank you, little fish, for giving us what we need in these troubled times—a story with a happy ending.

Cookies To make this site work properly, we sometimes place small data files called cookies on your device. Most big websites do this too.
Accept
Go to Top