Skip to content
Running Aground with a Clumpy Nudibranch

“I once had to make a marine-themed hat for a celebration. Inspired by the colorful options of this order, I made a Nudibranch headband that ended up looking like a beret (wish I had a picture). Their common name of Sea Slug is very deceiving. When you look up images ofNudibranch, you’ll see hundreds of pictures of different colors and patterns of this organism. Given what is going on in the world nowadays, I hope Susan’s article will inspire you to learn more about these magnificent creatures and appreciate the beauty in their diversity.” – Lee Higa-Okamoto, Executive Director of the Friends of the Waikīkī Aquarium

Running Aground with a Clumpy Nudibranch

Article and pictures from susanscott.net

While snorkeling on the North Shore last week, I somehow floated onto a shallow reef flat with no easy exit. The only way out without hurting the coral, or myself, was to wait for the gentle swell to lift my body off the reef, swim for a few seconds, sink back down, and then wait for the next wave.

It was slow going, but those pauses became a gift. One surge dropped me just inches from a big, beautiful nudibranch (pronounced NOODY-brank) resting on the coral. 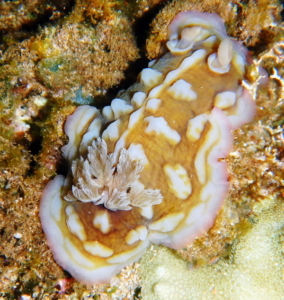 A pink-and-white frill surrounds the golden body of this clumpy nudibranch. Colors can vary among individuals. © Susan Scott

Nudibranchs are snails without shells, but the nudi, meaning naked, doesn’t refer to the absence of a shell.  It describes frilly gills exposed on the creatures’ backs.

Another name for nudibranch is sea slug, conjuring up the unpleasant image of the brown, slimy, disease-carrying garden pest. The marine versions of slugs, however, are oceanic masterpieces, stunning in their range of colors, patterns and shapes.

The nudi I found belongs to a family of rubbery nudibranchs nicknamed Dorids. In Greek mythology, Doris was a nymph, or divine spirit maiden.

Early naturalists were not as enamored as me over the appearance of this shell-less snail. In 1858, a scientist describing the species in Ceylon wrote, “The whole animal gives one more the idea of a horrid disease than the charms of a sea nymph.” Early scientific names for the species suggested an eruption (probably of pimples), the brain, the liver, and something rotting.

As researchers learn more about how organisms are related, or are not, scientific names change. Today, my nudibranch’s formal name, a mix of Greek and Latin, is more palatable: Asteronotus cespitosus. Astero means star, notus means the back, and cespitosus can mean turf-colored or clumpy.

Even with this nice name, though, few people have a clue as to what someone means if they say, “Wow, I saw an Asteronotus cespitosus!”

Hawaii guidebook author, John Hoover, addresses this language issue by giving creatures English versions of their Latin or Greek species name. In his book Hawaii’s Sea Creatures (highly recommend), he calls my nudi the clumpy nudibranch. And so it is.

The clumpy nudibranch is big, as nudibranchs go, growing to about 10 inches long. Mine was half that. The species thrive on sponges, from shallow water to 50 feet, and range throughout the Indian and Pacific Oceans.

I love my pictures of the clumpy nudibranch, which I somehow managed to shoot without getting scraped or bruised in just inches of water. Running aground has never been so much fun.

Cookies To make this site work properly, we sometimes place small data files called cookies on your device. Most big websites do this too.
Accept
Go to Top